When it’s time, you just know.

We had the Santa talk with our son last night. You know how they say “you just know” when it’s love? Well, it’s like that with Santa’s reveal, too. You just know when it’s time.

My son is twelve. His older sister was also twelve when we let her in on it two years ago, but that’s a coincidence. They were both ready in their own way and for their own reasons. This year, we noticed a few seeds of doubt in the boy; but I assure you, that kid was still a believer.

My husband didn’t feel a need to make much ado over it. As the oldest of three, he just sort of wised up somewhere along the way and went along with the program as if nothing had changed. There was no before and after moment in time, or someone confessing the decade long lie; he simply figured it out and that was that. I, on the other hand, had my bubble burst by an unfortunate slip of the tongue by my first grade teacher. I felt compelled to give our kids something else, a transition of sorts. One that recognizes the reason for believing and also lets everybody off the hook for pretending. 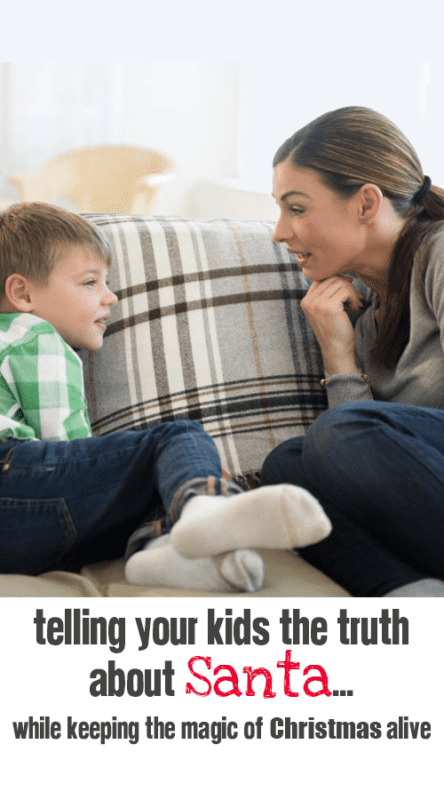 Here are the highlights of our two successful crossovers. Perhaps this will inspire the talks you’re planning with your own believers of any age. If you’d like to be a fly on the wall (or an elf on the shelf) for our conversation, it went something like this:

“Dad and I have been talking about how much you’ve grown this year. You’ve been thinking more independently, considerate of others, and responsible with important information. Because we can see how much you have matured, we feel it’s time for you to know something. Santa is real. And Santa was a real person who really gave gifts to the children in his community. And all those years ago, his community came together to ensure that his good works would never end, even as he grew older and wasn’t able to continue. Soon, people all over the world had caught on to the magic of that tradition, and it began to build into what some people call the Christmas spirit. Even today, the tradition of Santa is like a global secret that every adult in the world keeps together. Every grocery clerk, every teacher, every Hollywood filmmaker, every grandparent, we are all in on it. No matter what is going on, we all spend December sticking together in this one way, to keep kids believing.

We keep Santa alive because kids need to learn to believe in things they can’t see. Believing in something is an important skill. And like any skill, you have to learn how to do it. Letting children believe in Santa is part of how they learn to later believe in…(he interrupted here to say, “God.”  Yes!)…in God, in your relationships with friends and family, and in your own talent. Being a believer is powerful magic that you will need well into adulthood. Santa is a great way to learn that magic.

You have known for a long time that many other kids don’t believe. Some kids who say Santa isn’t real never got a conversation like this. They may have figured out their parents were filling the stockings, but they weren’t entrusted with the secret. If they had been, they wouldn’t tell others. You may have also suspected the truth, right? (Hesitant agreement here.) But in the past you weren’t ready to be trusted with the responsibility of being in on it. Now you are. We can see you’re big enough to carry on the traditions and the magic for your little cousins and younger friends. Some other kids never believe. Perhaps they don’t celebrate Christmas at all, or they were raised from an early age to believe in God & Jesus without Santa as a starter. When you were born, we didn’t go to church; so Santa was an important placeholder for you to start believing in the unseen.

We’re a little sad that you’re getting so big, because moms and dads always want our kids to stay kids. But we’re excited to have you on the team, helping to make magic for others. It has been an absolute joy making magic for you every year. (This is where my voice first cracked and his eyes started to puddle a little, like mine.) Now you know that we pick all the gifts and we eat the cookies. And we will continue to do those things! We will still put out those cookies, the magic key, packages from Santa, the whole nine yards. But this year we can work together to make Christmas awesome instead of anyone having to pretend, including you.” 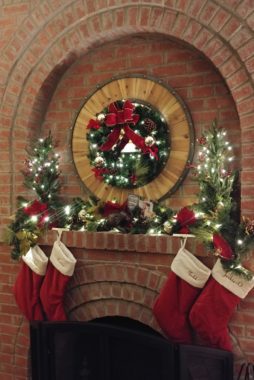 There weren’t a lot of questions, and after a moment of silence we knew we’d have to proactively explain that this realization extended to our elf, Flibbityjibbit. That was a whole new ball game. The elf factor meant he would be able to immediately get his hands dirty (literally) and be in on the action that very night. After a brief discussion of logistics – no fire hazards, no sticky messes that will attract ants, please be reasonable, etc. – his misty eyes turned into an ornery Grinch-like grin as he realized he could make the mischievous messes from now on.  In rotation with the rest of us, of course. You didn’t think I’d check out of this business completely, did you?

Later that night, he asked me a couple of times if it really was all pretend or if maybe there might be a little magic in the elf that he could break. He was genuinely nervous. Bless his heart, he really had been all-in as a believer. I assured him it was just a doll, which he accepted…skeptically. My husband was in the room when the rookie elf-mover took his first turn at bat. He said our newly converted “non-believer” considered using tongs because it was just too weird to touch it; and when he did, he was in awe of how it felt, and oohed and aahed reverently. What a wonderful way to end this era. I feel like we went out on top, with a true believer that was ready to be a knower.

I had a good cry after our talk. The passing of the age of innocence is a hard moment. But I assert the rite of passage is important. It acknowledged and justified our lifelong deceit, respected and valued his current capabilities and maturity and, mostly importantly, let me turn off that flippin’ “MOVE THE ELF!” alarm on my cell phone. I have never enjoyed dismissing a task so much in all my days. I know it’s hard to let go of the magic, mama. But let me assure you there is so much less stress on this side. No more secrets or panicky backpedaling. All that’s left is the joy of the season and watching our kids “believe” of their own free will. Sure, I’ll miss it a little. But I’m already digging this next chapter, and I hope you will too.