One of the biggest hardships we’ve all likely felt this year is not being able to see many of our loved ones. As an adult, I can understand the reasoning behind being socially distant, despite the emotional pain it causes me; however, it’s tough on kids who may not fully understand the gravity of the pandemic. My son is certainly missing his grandparents up north, and we’re going on over a year of not seeing each other. We’ve been video chatting and texting, but that’s not the same as seeing people in person. It hurts my heart to no end when my son asks me when he’ll be seeing Grammy Sue and Grampy Joe, not only because I know he misses them tremendously, but also because I don’t really have an answer to that question. There’s still a lot of uncertainty.

Then something arrived in the mail one day that immediately made the distance between us and family feel a bit easier: my eleven-year-old nephew in Connecticut sent my son a letter in the mail. It was a simple letter, just letting his cousin know that he misses him and looks forward to when we can visit again. These were things that could have been communicated via text or maybe on Facetime, but there was something magical and special about receiving a handwritten letter in the mail, addressed just to him. My son excitedly asked me to help him write a letter back.

It made me think: why not revive the art of letter writing?

I get the reluctance. Why return to the days of physical letters when we have email, text, social media, and video chat? We’re getting closer and closer to a world that only uses keyboards and touchscreens. Why would we encourage our kids to go back in time and start being pen pals with someone? 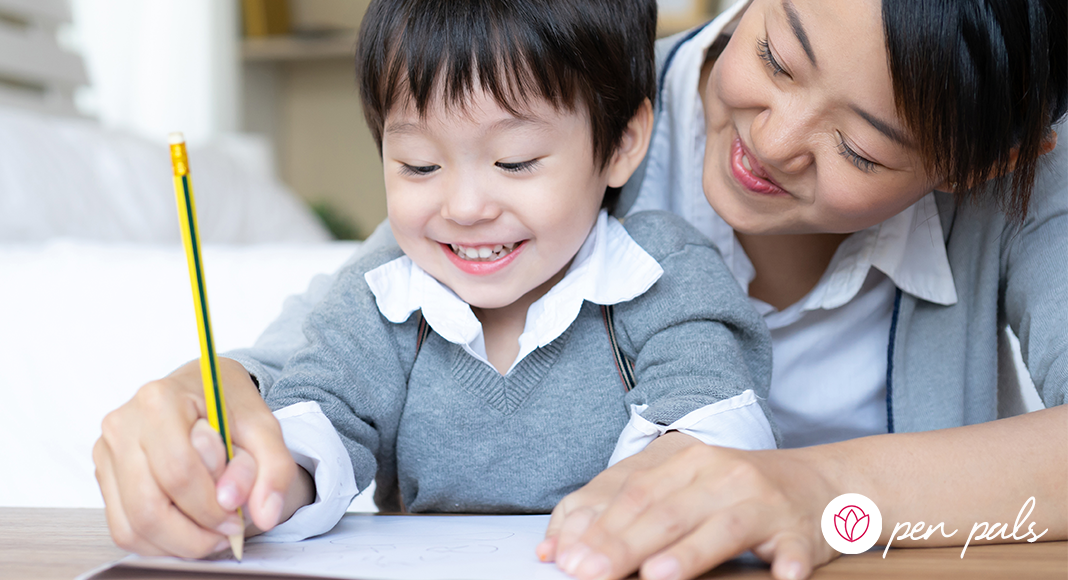 It’s simple. Letters mean more. And in a world that feels increasingly cynical, don’t we want to embrace things that have meaning and worth? Not to mention, in the socially distanced world in which we’re living, isn’t letter writing a lovely solution to reconnecting to our distant family members in a meaningful way?

Letter writing and our current reality seem like the perfect pair to me.

Yes, I know it takes more effort, but our kids live in a world of instant gratification. I’m constantly looking for ways to teach my son that things don’t just happen with a click of a button, but those opportunities are rare these days. When my son exchanged a few letters with his cousin, he realized that it would take a couple weeks to get a response, yet it didn’t diminish his excitement about the letters. What it did do was make him take pause and consider what goes into the pen pal process. Someone had to sit down with pen and paper and take the time to thoughtfully handwrite a message to a person, then carefully package it in an envelope and find a stamp to stick on it. All that effort creates a bond. And it just means more. 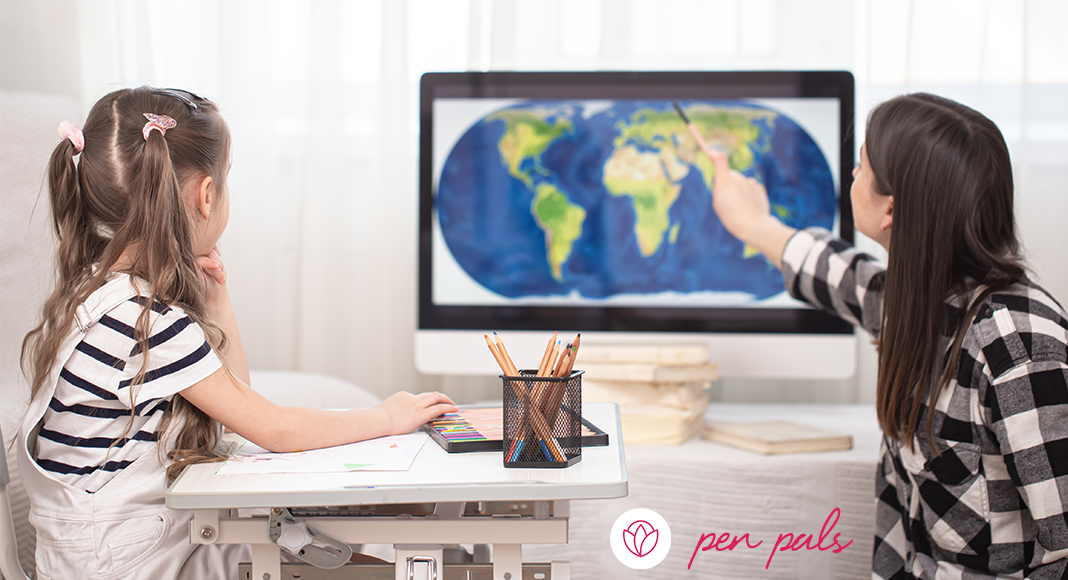 I don’t know why I hadn’t thought of this before. I knew from experience how pen pals can leave a lasting, wonderful memory. I, myself, had pen pals as a child. When I was in elementary school I had the privilege of having two pen pals, one local and one in Tanzania. I’ll never forget the excitement of receiving a new letter in the mail and then anxiously grabbing a fresh new paper to respond. I’m sure my teachers were counting these letters as grades or participation points, but that wasn’t even a thought in my mind as I responded to my pen pal’s questions and asked them some more. Twenty-five years later, those memories are fresher than ever, as they clearly made an imprint on my heart and mind.

Do you have to be a certain age to have a pen pal?

Wondering if your child is too young to be someone’s pen pal? No fear! Being a pen pal insinuates that your child needs to be an independent writer, but on the contrary, that’s not really necessary. Grandma can write a letter that you can read to your child, and then your child draws a picture for them in response. There is still that special bond happening when a letter arrives in the mail for your child, and the urge to respond to their special letter buddy is just as exciting in picture form. Also, I don’t care what age your child is, there is always delight in packing a paper in an envelope and getting to stick a stamp on it. Before my son could write, he loved getting to put the “sticker” on the letter and then enjoyed walking it out to the mailbox to put up the little red flag to alert the mailman. 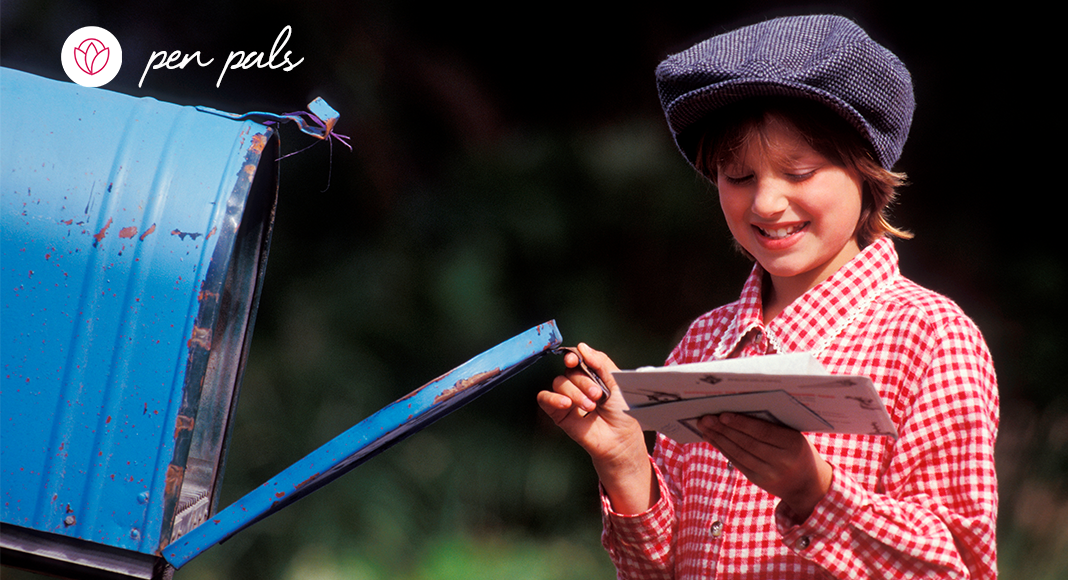 Now, let’s flip our perspective for a moment. When my son sends a letter to his cousin or grandparents, it’s not just about him. Let’s not forget that letter writing brings joy to both sides of the equation. I think my long-distance family members get just as much joy – maybe even more! – when they receive a letter in the mail from my son. In a time and age where there’s plenty to be sad about, let there be light where we can give it. Letter writing is a way for your child to feel the wonderful joy of being the person who can cheer up a loved one’s day. Indeed, getting an envelope in the mail with your name handwritten on it never gets old, no matter your age.

Here are 5 benefits to your child becoming pen pals with a relative: 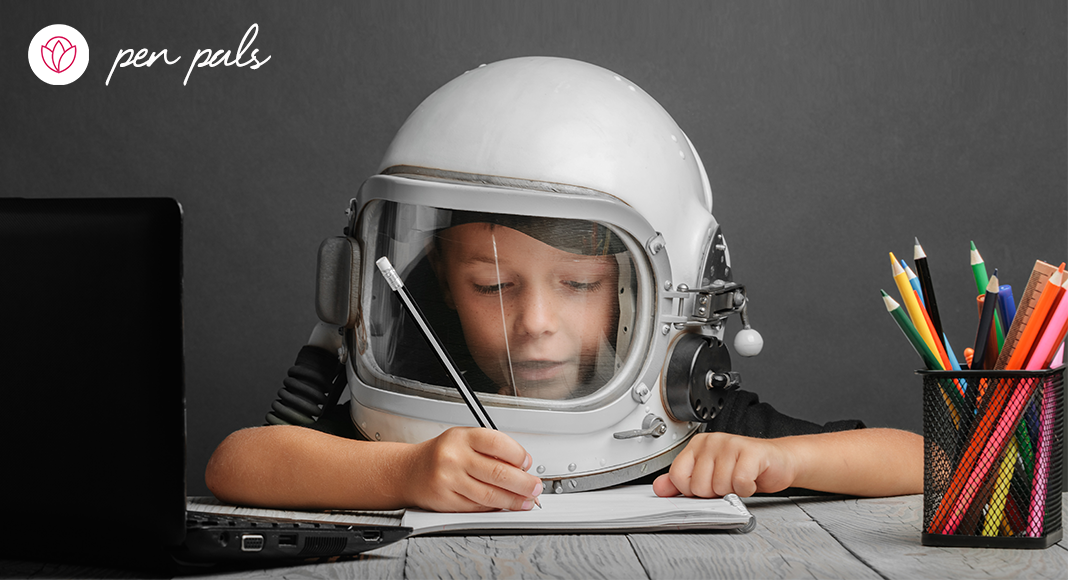 And, of course, I can’t end this post without urging moms out there to take up a pen, as well. Write a letter to your mom in California or your sister in Arizona, or whoever you’re wanting to reconnect with, even if they’re in the next town over. If you’re lucky, maybe you have a parent or grandparent with that beautiful cursive handwriting that seems to be going extinct. Each time we get a card or letter from grandparents, I always feel the need to save it, just to let me take in as much of that artform as possible. Heck, use this opportunity to brush up on your own cursive  handwriting skills. And as I’ve said so many times, modeling the behavior you wish your children to have works way better than words alone.

I plan to save any letters that my son or I exchange with relatives during this year (and beyond – who knows). Sometimes my son writes a few sentences, when other times he simply draws pictures of something and sends them off. Either way, it’s a handwritten, heartfelt part of my son visiting his long-distance family members through a simple piece of paper.

Writing letters won’t end this pandemic. It won’t make the pain of not seeing our loved ones all go away. But what it will do is help nurture the bond between two people who love each other but cannot be together. It will create those special little moments when someone opens up their mailbox and is surprised by an envelope, addressed just to them. It does produce an actual, physical thing, full of words of hope and love, which can never be deleted or archived in your inbox somewhere. It is unequivocally an opportunity to put a smile on a loved one’s face.

I can’t think of a more perfect time to revive the art of letter writing — in our kids, in our selves, and in anyone who needs a little cheer. Let’s embrace what we can during one of the toughest years of all of our lives.