Do you have an arsenal of must-have Mom tools? Your own bag of tricks that you turn to when you’re in a bind? Well, we’ve just discovered another MUST-HAVE to be added to your tool belt. Careconnect from Nemours Children’s Health System. 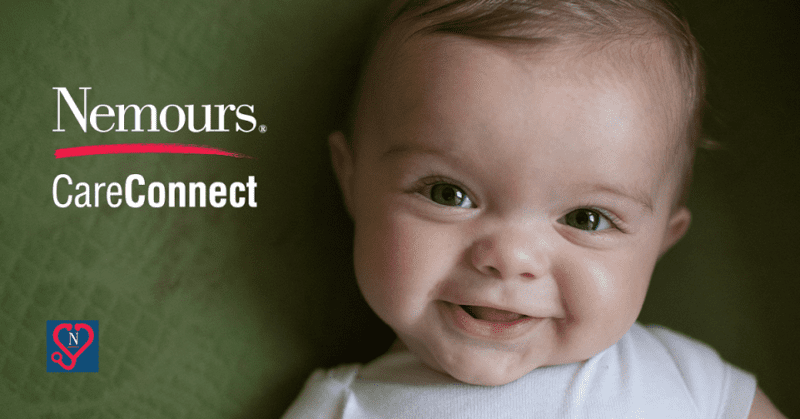 It was an unseasonably warm weekend morning, bright with the possibility and optimism that only a Saturday morning can bring. The birds were tweeting, I was relatively well-rested, and our coffee maker was churning out the good stuff at full force . . . . when my three-year-old daughter wandered into the kitchen, squinting at me through a layer of purulent crust that had cemented her eyelids shut during the night. “Hi, Mommy!” she crooned. “I’m sick!”

Suddenly, the morning had taken a turn for the disgusting. While I wiped the goop out of my daughter’s eyes, I weighed my options. I was pretty confident that her pediatrician did not keep Saturday hours, but hadn’t needed weekend services in over a year. Urgent care was an option, but the closest office was across town, and one of the last places I wanted to spend my Saturday morning was a crowded doctor office.

Then I remembered Nemours Care Connect. I’d never used it – or any other telehealth service – but I was tempted. Here’s what I knew about the service: that I could download an app to my phone or tablet or laptop and receive care from a real live Nemours pediatrician for a nominal fee. It had always seemed too convenient to be true, but here I was on a Saturday, with more crusty eyes and drippy nostrils than options. I gave CareConnect a shot.

The app downloaded easily and instantly to my phone, and I began the setup while my daughter chilled on the couch with a bowl of cereal and an episode of Peppa Pig. I entered her basic health information, the reason for our virtual visit and a method of payment. (The cost of an appointment is $49 – not yet covered by insurance in Florida.) A list of participating pediatricians and their profiles popped up on the screen, and I chose the first of three who were available.

Within minutes, we were face-to-face with an attentive pediatrician. She listened patiently to our concerns, taking a few moments out here and there to cheerily acknowledge our daughter as she jumped around and shrieked into the phone. (I was still in my pajamas, and struggled to stay out of sight as much as possible.) I wasn’t sure how the diagnosis would work, but the doctor we saw made ingenious use of the Facetime-ish setup. She asked me to position my phone so that she could see the membranes around my daughter’s eyes. The doctor looked at her mouth and throat, inside her nose, and then checked her chest for a rash and normal-looking breathing. “My nose is stuffy! It’s stuffy!” shouted my daughter in an attempt to be helpful.

Our doctor explained that the goop coming from my daughter’s eyes was likely related to some nasal congestion she’d suffered during the week prior. Noting some redness in the eyes, she explained that we’d need to use some antibiotic drops in our daughter’s eyes, and that we should look out for a fever. The doctor verified our pharmacy information, then sent the prescription information, and wished us a happy and healthy weekend.

A few short hours later, we’d picked up my daughter’s prescription from the pharmacy down the street and had already administered the dose the doctor recommended. My early morning panic had given way to relief, coupled with a sense of awe that it was so easy to see a doctor over the phone, and that I’d actually pulled the whole thing off so early in the morning.

From now on, CareConnect is firmly in my arsenal of must-have Mom tools.