A few years ago, when I published The Moms Magazine, we sat down with Amy Sweezey, a WESH-2 sunrise meteorologist to talk about being pregnant on-air, delivering a baby during a hurricane and and pregnancy tips during a hurricane. Throughout our laughter-filled conversation, we learned even more from this down-to-earth mom.

The Moms Magazine: We read that you were pregnant during the big 2004 hurricane season. Tell us about it!

Amy: Oh gosh! It was such a stressful time! It was Baby #1 for me, and she was born while Hurricane Jeanne was making landfall. So when Charley, Frances and Ivan all made landfall in the state of Florida, I was 8 – 9 months pregnant. Charley came through August 13, and then they all came through one right after the other over six weeks’ time.

There was a running bet in the newsroom of whether or not the pressure changes with the hurricanes would make me go into labor early. And actually, we had another meteorologist on staff at the same time who was also pregnant, and we were due on the exact same day. Bizarre-O! So we were both working during that time, wondering if anyone would go into labor.

But I didn’t. My baby was born on time, at the end of September. Everything was great. She was born at Arnold Palmer, while Winnie Palmer Hospital was under construction. We sat in the hospital bed looking out the windows watching pieces of plywood blow off the Winnie Palmer building, watching the winds from Hurricane Jeanne as it made landfall. It was crazy!

[After she was born] we were on lockdown. We were in the hospital for four days. The nurses weren’t allowed to leave. So it was a big party for four days. (laughs)

The Moms Magazine: And you didn’t name your daughter Jeanne?

Amy: (laughs) I did not, though her name does start with a “J.” But I had had enough of Jeanne. I did not need any more hurricane reminders.

The Moms Magazine: What was it like being pregnant on the air during a hurricane?

Amy: You’re on the air every 10 minutes, trying to find time to go to the bathroom, trying to eat, trying to sleep. You’re on these 12-hour shifts – 12 hours on, 12 hours off. And 12 hours on means you’re actually on TV for 12 hours. So you have to get to the station in time to get ready. And when you leave, you have to make sure the next shift is ready to go. So you’re really at work more like 14 to 15 hours, and then maybe you can make it home – if your road isn’t blocked by trees that have fallen down. It was a little stressful.

The Moms Magazine: Do those atmospheric changes really trigger labor, or is that an old wives’ tale?

Amy: Our doctor who was on-staff at the time assured me that it was just an old wives’ tale and that I didn’t need to be worried. However, there are lots of grandmas who disagree with him. So I don’t know.

The Moms Magazine: What special concerns might there be for women who are pregnant or new moms during hurricane season?

Amy: I think it’s especially scary when you know your due date is coming up in one or two days, and you have a cone of the hurricane’s path going right across your area. Women end up going to the hospital, and they end up being sent home because they’re not really in labor. And then they have to come back the next day. So that part is scary. I’d say just talk to your doctor and make sure you’re comfortable with the plan the hospital has.

The Moms Magazine: What extra precautions would a pregnant mom or new mom need to take during hurricane season? What extra items do they need for a hurricane kit?

The biggest thing, I think, is the electricity. You don’t realize how dependent you are on it, until you suddenly don’t have it. 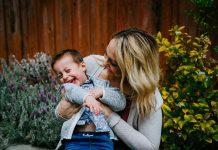