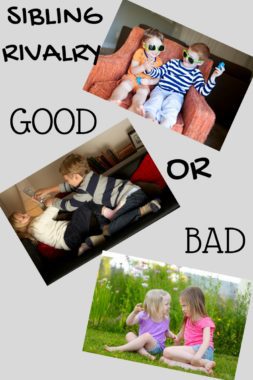 “If there’s no fire, flood or blood – work it out.”  When I first heard my sister tell her kids that, it cracked me up. She’s 6 years younger than me but has been a mom a lot longer than I have. We were on the phone (my family lives in Texas) and her boys were shouting at each other about something. Calling out to her “Mom, Mom, MOM!” I’m sure it was about a toy or one boy annoying the other and that’s when I heard her tell them “If there’s no fire, flood, or blood – you guys can work it out”. We both started laughing and I told her she’s so mean. She told me, if she responded to every single little argument the boys had with each other she wouldn’t have time to do anything else the entire day.

I thought back to our childhood when my older sister and I would get in to arguments. For the most part they took place when neither of our parents were around. They were either at work (we were latch key kids) or they were tending to my younger sister and brother. I’d like to say most of the time we worked things out ourselves, after a ton of drama of course.

Now as a mom, if I see conflict I want to solve it rather than let it work out on its own. I’m not sure if that’s a good thing or bad thing. My significant other has 2 boys, they’re 15 and 12, I came in to the picture when they were 7 and 4. The boys have had their share of brotherly arguments, but can I honestly say that we stepped in every single time to break it up? No, I don’t think so. Actual physical fighting is a different story. That is never allowed or tolerated. But does an argument amongst siblings or other kids, especially at a young age always have to be solved by an adult?

After reading up on the subject, it turns out sibling rivalry is sometimes good. According to many, sibling rivalry teaches children critical thinking, self -control and empathy. As long as parents step in when things get too heated and encourage healthy rivalry, children will tend to grow out of it. So like my sister says, “If there’s no fire, flood or blood – work it out”.