Fiddler on the Roof is one of my favorite musicals. It is the story of Tevye, a father of five daughters, who sings about his family and the importance of their traditions. “Who must know the way to make a proper home? The Mama, the Mama! Tradition!” Tevye was a smart man.

This mama is a big believer in creating and preserving family traditions. They are the colorful threads that create a family tapestry of memories and tie the generations together. Traditions don’t have to be complicated or expensive. The best ones often happen unexpectedly and become part of a family’s fabric over time.

Take my great-grandmother. Whenever she drove away, she would wave a white handkerchief out her car window. Three generations later, our family still scrambles to find something white to wave when we drive off. Over the years, it’s been everything from a fast food paper napkin, gas receipt, baby wipe and sock pulled from a hamper of clean clothes heading back to college.

When my children were toddlers, I bought them cassette tapes with a personalized birthday song. It was a cheesy melody featuring a man named Zoom who lived on the moon and came down to Earth to sing them a tune. “Hey, John/Allison it’s your birthday and I’m here to say, Hey John/Allison, you’re the big star today!” It ends with Zoom’s promise, “I’ll see you next year!” And indeed he does. Zoom and his personal song surprise John and Allison every year on their birthdays. During breakfast in elementary school. In the car on the way to middle school. Recorded on their cell phones early in the morning when they were in college. Today, many of their friends know Zoom’s song and will post the lyrics on Facebook as their birthday message.

Perhaps our family’s most famous tradition is Jack-o-Lantern cheeseburgers at Halloween. My mom started the tradition by carving faces into squares of American cheese. I took the tradition up a notch by letting the kids carve the faces and adding orange and black side dishes: carrot sticks, cheese doodles, mac and cheese, black olives and raisins. Orange soda and root beer rounded out the menu in the days before Big Gulps ruined it for everyone. The tradition expanded over the years to include friends and neighbors and today it is an annual Halloween event.

Recipes are another easy way to create family traditions. I pity whoever tries to change up the recipes for my dad’s turkey stuffing (not dressing!) and sister’s Thanksgiving gravy. My mother-in-law’s chewy cakes are a Christmas day staple and my grandmother’s key lime pie is the bar by which all others are measured. My most cherished recipes are those hand-written on recipe cards, yellowed and ingredient-stained, by relatives who are no longer with us. Recipes.com will never evoke the same sentimental memory.

What are you family’s traditions? How are you keeping them alive and making memories your children will want to share with their children? Tell us your favorites! 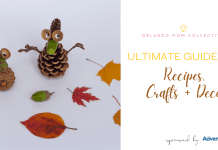 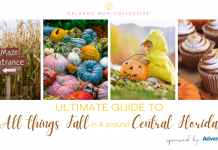 2021 Ultimate Guide to All Things Fall in Central Florida!