I never know how to describe one of my daughters when asked where she “falls”. She is the first born of twin girls and she has an older sister. So is she a middle daughter? Older twin?  Younger sister? Yes. All of the above. Right or wrong, I usually say she’s our middle daughter, but those aren’t the personality traits she exhibits most, which has always fascinated me.

The other two exhibit stereotypical traits of those in the same birth order, or so I think. Our oldest is responsible, strong-willed, a born leader. She’s the first to reprimand, or tell on, her younger sisters, but she’s also the first to tell my husband and I to stop scolding them. (As if reprimanding her sisters falls solely in her 4-year-old court of responsibility.) She nurtures her sisters and she thinks about their well-being as if it’s second nature.

Our youngest is carefree and empathetic. She loves to follow her older sisters around, and, as her oldest sister says, “is always copying me.” She’s loyal, affectionate and she wears her heart on her sleeve. She will love as long as the day is long…until she wants something, and then you best get out of her way. 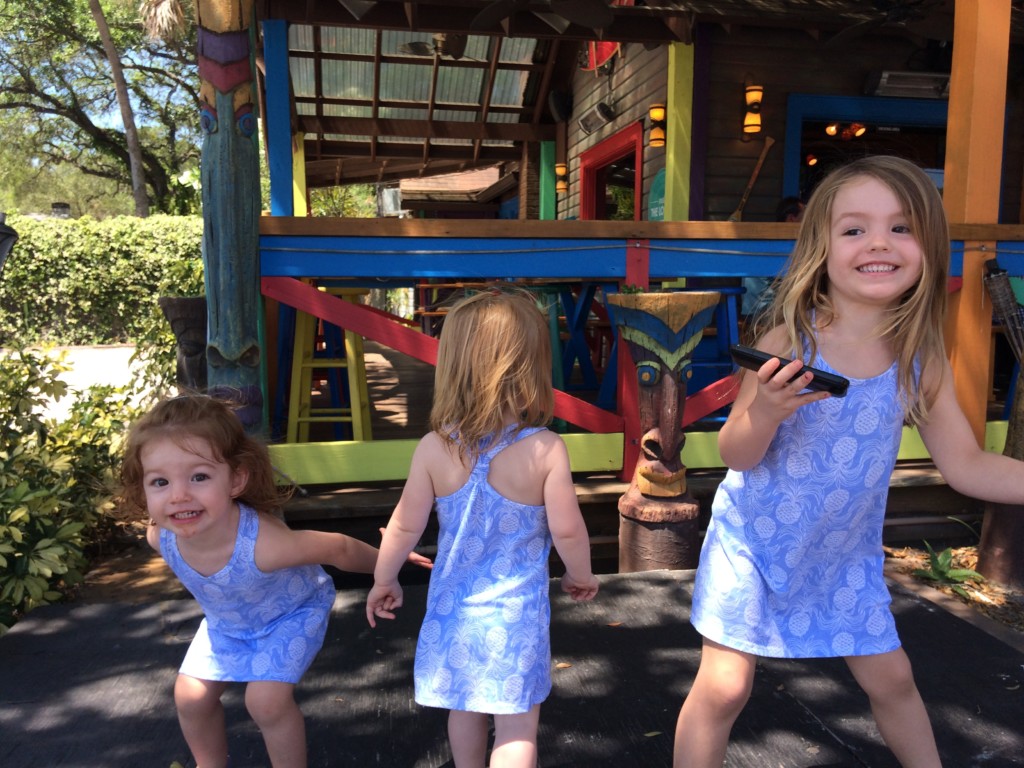 Having fun dancing together

A recent study that showed birth order may not be a true indicator of your personality was referenced in TIME article last year. It was as expected – where you fall among your siblings may not mean that your personality is pre-determined. This article, as well as others I then read, all held that while most theories of sibling personality traits hold true, there are three factors that must also be considered – gender of the siblings, number of years between siblings and if there are multiples in the family.

The general consensus was that if there are twins in the mix, the only birth order traits that typically apply are those of the oldest sibling and youngest sibling. So technically speaking, she is our middle daughter, even if only by one minute. But according to research, her personality should therefore be similar to that of an oldest child. And it is.

Forget the research. Almost since the twins came home, our oldest twin and her older sister have been battling it out. To this day, our oldest daughter will almost always choose our youngest daughter (AKA: the younger twin) when asked to sit by one of her sisters, or share her snack or hold one’s hand. It’s heart breaking to watch, but given the context, I get it. Our oldest child and our middle (AKA: our older twin) are so similar in personality that it creates a rift, and it’s astounding that it’s so noticeable even at their young ages (4 and 2).

Our “middle” daughter is thoughtful and considerate, and she always looks out for her younger sister, just like our oldest. Comfortable being the first of her sisters to try something new, our middle is not always willing to follow her older sister’s lead, which upsets her older sister. Our middle is as determined as they come, but if there is a dispute over a toy or snack, she is the first of the three to give in to keep the other two happy. She does it without a second thought, and often without being asked.

My husband and I are still learning when to encourage the oldest and the middle to try harder and when to leave it be, even if it’s difficult. But the joy that surprises each of them when they realize they just did something together and they had fun doing it, absolutely melts my heart. It’s beyond obvious that they both adore their youngest sister, and I have no doubt that they most certainly love each other as well. In fact, we can’t take any one of the 3 anywhere alone without all 3 spending the entire time apart asking for her other sister(s). And frankly, regardless of birth order and personality, that’s all that matters.