Today started as any other Monday. I made the dark roast coffee. I packed the lunches full of tiny human favorites. I passed out pairs of brightly colored socks. That’s about where the similarities ended because instead of hopping on his bright red scooter and heading off to work, my husband joined us in the car for morning car line. We had a 9AM appointment with a neuropsychologist to find out the results of hours and hours of testing that had taken place over the past 3 months.

After making small talk with the receptionist and paying yet another co-pay (mental healthcare coverage is a joke BTW) my husband and I sat in silence for 15 minutes inhaling the essential oil filled air listening to top 40 radio. My stomach was in knots waiting. Not because I was nervous about most of the potential outcomes of the appointment, but for one…that there would be no reason or answers for my son’s behavior.

When we finally entered the office and sat at the doctor’s table, we were greeted by STACKS of papers analyzing our son. We discussed his intelligence, sensoring processing abilities, impulsivity, motor skills, and strange obsessions only to be greeted with one {not surprising} result – our son was on the autism spectrum.

Thankfully our doctor had an assortment of specific and actionable tactics for us to work on with him to help him build up his “lizard brain” and cause less episodes and outbursts.

After the appointment I left loaded with a ton of feelings and a list of therapists and IEP advocate specialists to reach out to. My head was swirling about whether theme park tickets for Christmas were really the best gift now. I don’t want my son to be overwhelmed on every visit, but what about my other children? How quickly could I get him a bike? How quickly could I get all 5 of us bikes so that no one was left out? What would be the best structured, social activity for my child?

My husband left for work and I sat continuing to stew in my thoughts all day. I got no work done. I watched Grey’s Anatomy while searching on my phone for resources. After school I was going to get it right. We would play with our friends in the field for half an hour. That would give me the chance to check off the first thing on the list…and then it started to rain at pick-up. Shoot. This was going to be tougher than I thought.

Traditionally when we get home from school there was a “relaxation” window where I would let them watch tv or play devices. I stuck to this window because of the need for sticking to schedules and routines and I stand by my decision because he completed his homework quickly and efficiently. No arguments or reminders were necessary…his brother, on the other hand, decided to be a terror.

Once my son was done with his work he instantly asked for devices to which I told him no, but that he could earn screen time. <INSERT MELTDOWN HERE> Things were thrown. Walls were hit. Whistles were played directly in my ear. I kept my cool {not something I am known for}. I gave him choices of listening to how he could earn screen time and he just kept fighting. Remotes were snuck. Video games were turned on on the sly and I shut them down. <MORE MELTING DOWN> Dinner was refused.

Finally when my husband came home he brought a wave of fresh air. My son finally calmed down and was able to listen to some of the results from the morning’s doctor appointment. He followed directions and earned his 15 minutes of screen time which he didn’t even use by choice. He drew on a box and created a luxury yacht for him and me filled with a wine bar for me and a Fanta bar for him. I gave him reminders and countdowns until bedtime and once the time was up he was the first one up the stairs with a hug and a smile.

I am emotionally drained.

I had a MASSIVE meltdown in the bathroom.

I survived my first day as an autism spectrum parent. 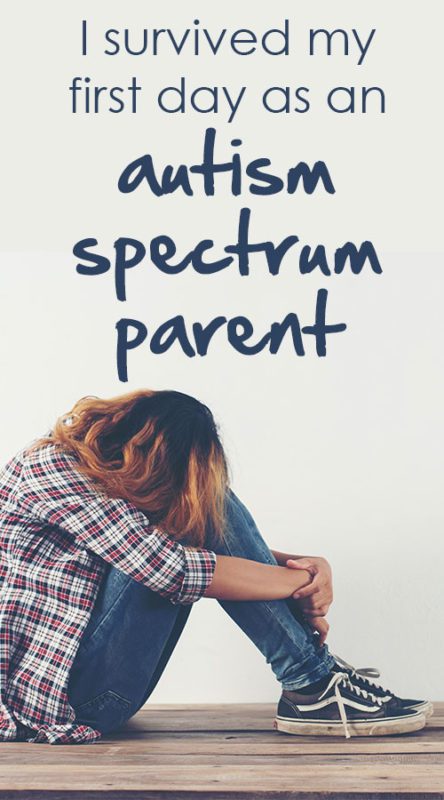