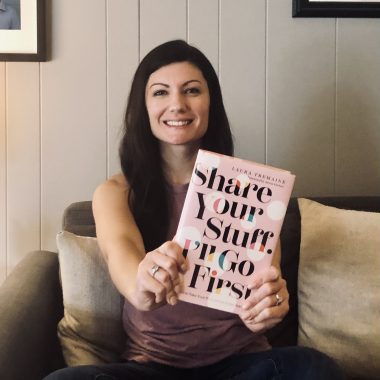 Three weeks ago, the Orlando Mom Collective Book Club got to chat with the author of the book we’re currently reading, Share Your Stuff. I’ll Go First. Laura Tremaine, writer and podcaster, joined us on a Saturday afternoon (morning time for her in Los Angeles!) over Zoom, as we commenced on what became a forty-five minute conversation about her book and all the things surrounding it. We laughed, we smiled, some of us shed a few tears (I was one of them) – but mostly, we connected over motherhood.

I almost immediately told Laura that I appreciated her for identifying as a “whole human” versus seeing herself mostly or even only as a mother, a notion I connect deeply with. I also went on to say that I struggled with identity after having a baby, and even penned an entire personal essay on my inner ponderings of if I’d ever feel like myself again. Laura’s response to these comments gave me pause.

I wish the messaging was different for mothers.

Hm. Messaging. I had never really thought about this part of the motherhood equation. I took a mental note that I needed to circle back to that topic alone, just with my own thoughts. The conversation carried on and away from motherhood, as we continued to talk about different aspects of publishing and the writing process, but the idea of messaging stuck with me.

When the conversation was over, I came back to this idea and asked myself: what exactly is messaging? Merriam-Webster dictionary defines message as “an underlying theme or idea” and thus messaging is the underlying theme or idea conveyed to us through television, our neighbor, social media, our mother, our friends, advertisements, etc. The list goes on and on when we think about who is constantly doling out messaging (and we, of course, give out messaging, as well), but I was wondering if there were some common underlying themes and ideas that we experience as mothers in any given part of motherhood.

Here are the messages that I received throughout my motherhood journey.

Pregnancy: “Sleep now because you won’t ever sleep again!”

Newborn phase: “Are you tired and stressed now? Just wait until they can move!”

Toddler stage: “You think the twos are bad? Just wait til you get to the threes!”

Elementary Age: “Oh, just wait until those preteen years. The attitude is out of control!”

Hmmm. Okay, so we have some sleep themes. Some stress themes. And yes, obviously, there’s some sleep deprivation at times and there’s a lot of stress that comes with motherhood too. But the common theme I see is this: motherhood is two decades of impending doom. Two decades (or more if you have more than one kid) of just going: okay, I’m tired and stressed now, but apparently, it’s going to just get worse. Got it.

I now have a sixteen-year-old stepson and a five-year-old son, so I’ve been around the block a little when it comes to motherhood. So does the messaging I’ve received for years now match how motherhood has actually felt? Has it felt like a decade of impending doom?

Um, no. Of course not. Yes, there’s stress and I’ve lost sleep due to worrying. Yes, I’ve felt like it did get a bit crazier when my son could crawl and that, wow, when he started to talk, I felt like he would never stop talking. Yes, it is stressful as can be to have a sixteen-year-old driving. On his own. Through Orlando.

There’s no way around it: motherhood comes with stress and a smaller amount of sleep.

But it, in no way, has felt like a decade of impending doom. Each time I thought about the next phase my kids were entering into, I would think: will it be terrible? But each new phase that comes is never terrible. It comes with the good stuff and the bad stuff, just like any part of life.

Let me give you an example from my own life.

Two years ago, I had a sweet, little three year old. He was timid, giggly, and so cuddly. However, I would get frustrated sometimes because he was still so dependent on me, and I felt like I rarely had time to myself. Still, it all felt doable and bearable, especially when he would flash his little smile at me or snuggle up with me on the couch. I remember thinking: I don’t want this to ever end. Whatever is next couldn’t possibly be as awesome as this stage, and I was dreading my adorable little child suddenly gaining a social awareness and experience feelings like embarrassment.

But, of course, he did grow up and now I find myself with a five-year-old. Once again, I see myself loving certain aspects of this age and frustrated with others. He’s experienced the torment of embarrassment, but he’s also basked in the glory of being able to cast a fishing line for the first time on his own or write his very own stories. There’s stress and sometimes I lose sleep, but not once has it felt unbearable or just plain awful. In fact, every stage I’ve experienced in motherhood has been the good and the bad, hand in hand. Never once have I gotten to a certain stage and thought, “Ugh, this is horrible! Can’t wait till it’s over!”

That contradicts the messaging, doesn’t it? Although I’ve certainly felt the impending doom of being on the cusp of a new phase, never has that actually been the reality when I’m in it. In fact, though the specifics differ from stage to stage, it is always equal parts good and bad. The amazing and the frustrating. The stuff I love about this stage and the stuff I’m just going to not love, and the fact that that’s okay.

Let’s circle back to Laura’s statement: I wish messaging was different for mothers.

One from me. One from Laura Tremaine.

From Laura: You’re going to lose yourself in new motherhood. You just are. But you’ll come back to yourself again. You will.

Honest. Realistic. It’s not all good and it’s not all bad. And there certainly isn’t any impending doom that we have to worry about.

We’ve all received messaging. We’ve all given out our own messaging. My hope for today and moving forward, I can be more intentional about the messaging I send out in those tiny little interactions I have with women who are experiencing motherhood. Not to promise that motherhood is a constant paradise or that it’s constantly unbearable. But rather, that there’s some good and there’s some bad. There’s beauty and there’s frustration. We’re whole humans who open our hearts to those little ones, and experiencing all that comes with it is taking in the full motherhood experience.

This is just a little snippet of our conversation this month in our OMC Book Club. I truly believe that community is the answer to so many things, and chatting with these ladies about motherhood and so much more supported that notion. This conversation has made me rethink messaging and motherhood, and dive deeper into topics that I never really had considered before.

I’ve said it before and I’ll say it again.

It makes a difference.